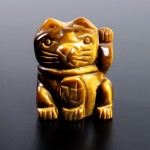 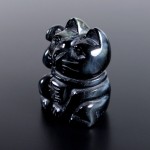 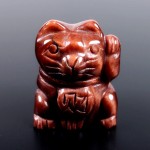 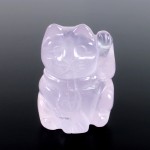 The Lucky Cat is an iconic symbol of Prosperity and Good Fortune used throughout China and Japan. If you are a cat lover (and/or food lover like myself), you've probably noticed these Maneki Neko Statues in your favorite Japanese or Chinese restaurants; and maybe in other places as well. There are many myths surrounding the Lucky Cat, but all agree that he is a bastion of good luck!

I simply adore their friendly features and sweet dispositions! This is one reason that we decided to carve these Maneki Neko Kitties from a few select Gemstones.

Maneki Neko is Japanese for "beckoning cat." The message he holds says "Please come in. You are welcome!" and he is beckoning you with his paw. Now, to westerners it may look as though he is waving, perhaps saying hello or goodbye, but this is due to cultural differences in body language. In Japan the beckoning gesture is made by holding up the hand, palm out, and repeatedly folding the fingers down and back up, thus the cat's appearance. He is saying "Come here". 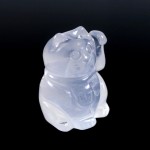 This is my favorite Legend of the Maneki Neko:

In the 17th century, there was a rundown and poverty-stricken temple in Tokyo. The temple's priest was very poor, but he shared what little food he had with his pet cat, Tama.

One day, a wealthy and important man was caught in a storm while hunting and he took refuge under a big tree near the temple. While he waited for the storm to pass, the man noticed a cat beckoning him to come inside the temple gate. This was so startling that he left the shelter of the tree to have a closer look at this unusual cat. At that moment, the tree was struck by lighting.

As a result, the wealthy man became friends with the poor priest, and the temple became prosperous. The priest and his cat never went hungry again.

When Tama died he was buried in the Goutokuji Temple's cat cemetery with respect and love, and the Maneki Neko was made in honor of him.

Place A Maneki Neko in your place of business, or your home to bring in good luck and visitors. 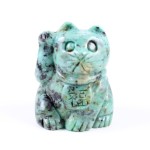 While you’ll most commonly see a white Maneki Neko with orange and black spots, there are quite a few color variations and they each have a special meaning.

Calico: Traditional color combination, considered to be the luckiest

Red: Success in love and relationships 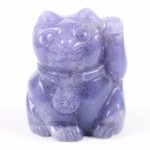 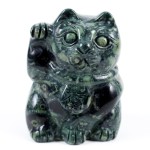 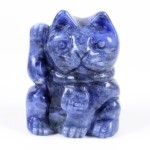 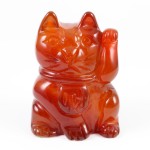 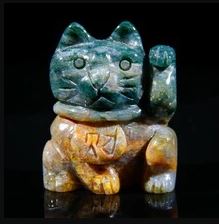