Crystal Skulls are amazing tools for opening ones perceptions to the divine, the ethereal, and the infinite. Crystal Skulls also have the very special ability for helping one to access the higher self through meditation.

There are believed to be 13 quintessential ancient skulls, who when reunited will mark the beginning of an enlightened golden era for mankind.

Little is known about these ancient peoples and their interaction with the skulls. Why did they create them? What were they used for? What significance did they hold for these people spiritually and or culturally? Some believe that the skulls are a link back to Atlantis, and that they are highly refined tools for communication and the storing of information.

"Look within. There you will find the answer to every problem. You cannot ask a question that you cannot answer within thine own self, if or when you attune thyself to the Infinite. Thy soul is eternal, thy soul-mind is eternal." - Edgar Cayce

There are believed to be 13 quintessential Ancient Crystal Skulls, who when reunited will mark the beginning of an enlightened golden era for mankind. Crystal skulls have been found in many ancient cultures including Tibet, Mongolia, and Meso-America. Many small ancient or old crystal skulls have also been found throughout these regions.

Little is known about these ancient peoples and their interaction with the Crystal Skulls. Why did they create them? What were they used for? What significance did they hold for these people spiritually and or culturally?

Some believe that the Crystal Skulls are a link back to Atlantis, and that they are highly refined tools for communication and the storing of information. 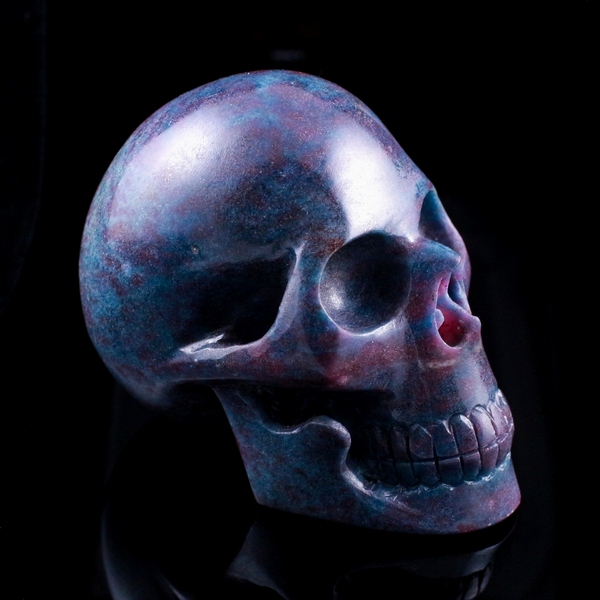 Today, contemporary Crystal Skulls are being created for our own spiritual development. We are at a period in history where our minds are opening to new realities and more infinite possibilities. Crystal Skulls are here at this time as a pathway towards enlightenment. In this new era of awakening the Crystal Skulls are working to facilitate this activation.

An interesting Quote on Contemporary Crystal Skulls: “One may think that, in the presence of [Ancient Crystal Skulls] the contemporary crystal skulls almost fade into insignificance. However, contemporary crystal skulls absolutely have their special powers. They have their beauty and are even for the most experienced crystal skull worker a continuous source of healing and growth. In many ways it is easier to work with them. Their energy seems to be more “accessible”. Besides, nowadays contemporary skulls are available to anyone who chooses to be a skull-keeper, whereas ancient skulls are rare and mostly inaccessible." Amayra Hamilton

In this way Contemporary Crystal Skulls allow us to become Crystal Skull Caretakers and to embark on an entirely new journey or learning and discovery which is completely personal. And it is easy to imagine, that someday perhaps, these new contemporary skulls will be Ancients in their own right! 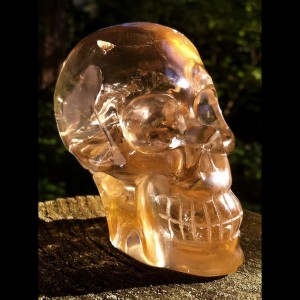 Quartz Crystal is an exceptional example of energy amplification: it is the ultimate tool for assisting in the creation of power and provides for clarity of thought; enhancing the effects of positive thinking and visualization. Quartz has been used for centuries as a tool for meditation and healing. It is a stone of immense capabilities when coupled with the human mind.

It is said that crystals are a form of solidified consciousness. Like water, crystals respond to and reflect in a seemingly passive way their surrounding environment. However, this interaction is not at all passive! Although, we do not always see their effects visually, crystals are constantly shaping and interacting with their surroundings. Their presence amplifies the energetics of a room. For example, a meditation room peppered with crystals is activated to the meditative field and will hold those energetic qualities even when a meditation is not in progress. One may walk into that room and “feel” that it is an amplified energy field attuned to meditation. Furthermore, the meditative work done there will be uplifted by the amplification qualities of the crystals. The use of a Crystals during meditation facilitates the establishment of a finer communication with other worlds, the crystalline world, and the inner world of the Self.

Crystals of all kinds work in this relationship to their environment. More dense stones such as Jaspers, Agates, and other opaque stones like Sugilite and Turquoise anchor energies and work from within the Physical Earth Plane. Many of these stones then also have their own unique characteristics which benefit from the presence of higher energy crystals who further amplify those characteristics. So, over and over again, Crystals Amplify & Anchor Energy!

Now what about Crystal Skulls? Do they also amplify energy? YES! 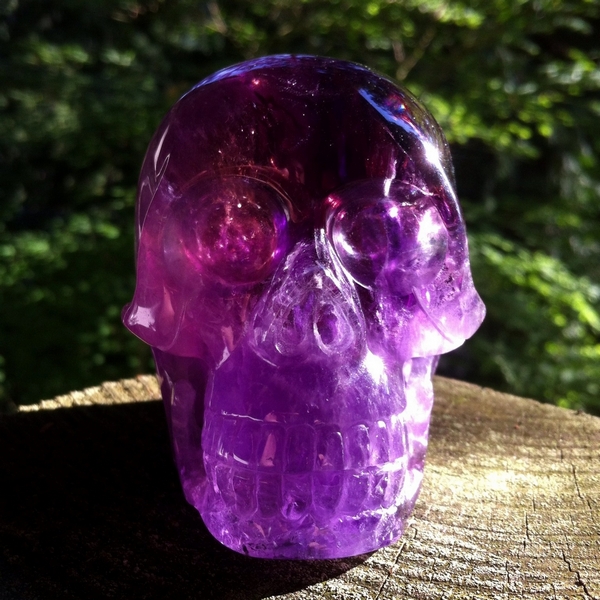 Because of their very nature as crystals, crystal skulls amplify and anchor energy. Being a crystal cut and shaped into the form of the human skull, however, adds a wholly new set of dynamics! No longer is the mineral in its original form, it has a completely new geometry. Now the crystal can communicate through a more humanized medium. As Edgar Cayce said, "The human skull represented the perfectly designed structure through which consciousness comes into this world, and through which consciousness reaches into other worlds."

The geometry of the human skull is very personal to each of us. It is our innate location of mental understanding. Through the human skull we encounter and interact with our world on the mental plane. In one sense, the crystal skull is a transformer of spiritual energies for our rote understanding; allowing crystals a more human face accessible to our current level of evolution. Also, the crystal skull is an emotional trigger. This emotional trigger works on a subconscious level to deepen meditation and enhance the dream state. 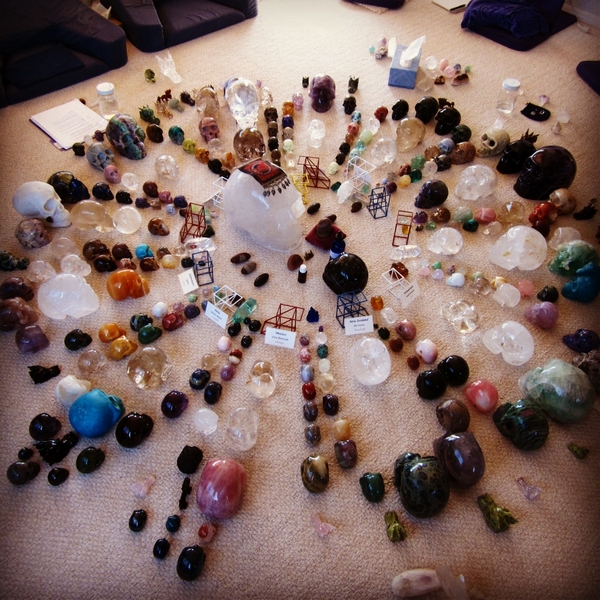 Each skull has its own personality and unique characteristics; as each of us as individuals are different, so too are Crystal Skulls. This is an exciting realization when beginning your own crystal skull collection! You will find that every skull you encounter will have unique qualities that will bring forth different reactions. Some pieces will stand out, while others may be more subdued or inward facing. Each carving will have its own special dynamics and “abilities”. One may find themselves drawn to a specific skull or set of skulls for meditations, and different pieces for dreamtime. The truly phenomenal thing is, it all works!

My first Crystal Skull came to me in the early 1990's. I decided to keep a beautiful Madagascar Rose Quartzcranium. She is very gentle and welcoming, always smiling and with such a sweet radiance, I could not deny her! Without knowing much about skulls I began bringing her to bed with me. I had a particular feeling that she was already working with me in dreams and through my subconscious mind. She was working to deepen my awareness of the natural world around me, and helping me to unlock the vast potential within. I believe this is the work of all crystal skulls.

By bringing crystal skulls into your life you will begin to notice these subtle elevations in dreams and consciousness. One may find that old issues come to surface; this is a renewal process through which the skulls will enable healing, regeneration, and the freeing of unnecessary cycles. We have found that regardless your conscious commitment, crystal skulls are dedicated to making things happen! They are extraordinary catalyst for spiritual development. On all levels of consciousness crystal skulls are in constant interaction. Their mission is to explore and expand along with us.

When choosing a Crystal Skull, go with your gut instinct. The skull does not necessarily have to be beautiful; as long as you are drawn to it for a special personal reason. Each person has their own individual tastes that are just right for them; trust your personal feelings! 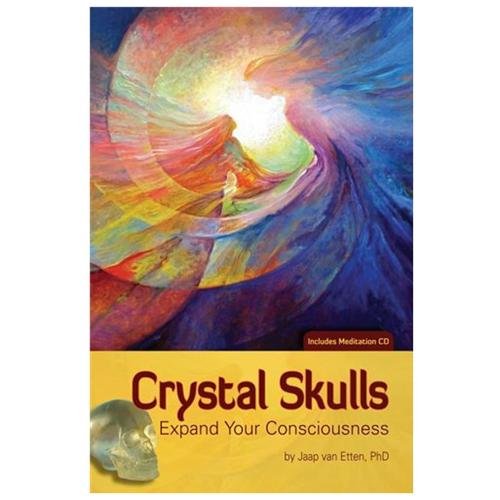 "Crystal Skulls: Expand your Consciousness" weaves practical information on crystal skulls with meditations to provide a deeper understanding of the role of crystal skulls in expanding consciousness of individuals and of mankind as a whole.

Filled with useful guidance for beginners and those who have worked with crystal skulls for a long period of time; this books invites you on a journey of awakening the potential of your crystal skulls - and consequently awakening yourself.

A beautifully written and researched book; this is the practical guide that we all have been longing for.

Discounts, Sales, Crystal Guidance Blogs, and New Items. Not more than 1 per month; most likely, much less often.